Our Holy Father Pope Francis entered his papacy into Church History in a special way this past week.

Our Holy Father Pope Francis entered his papacy into Church History in a special way this past week.

On March 13th in St. Peter’s Basilica, He announced the celebration of an “Extraordinary Holy Year”.  This “Jubilee of Mercy” will commence with the opening of the Holy Door in St. Peter’s on the Solemnity of the Immaculate Conception, December 8th, 2015 and will conclude on November 20, 2016 with the Solemnity of Jesus Christ, King of the Universe.

This was announced on Pope Francis’ 2nd anniversary of becoming Pope.  The opening of the Jubilee will take place on the 50th anniversary of the closing of the Second Vatican Council in 1965.  Our Holy Father wants this Jubilee to impel the Church to continue the work begun at Vatican II.

Ordinarily Jubilee Years were held every 25 years so that each generation could experience one.  “Extraordinary” Jubilee Years are announced on the occasion of an event of particular importance.

Pope Francis saw a need to focus on Mercy and Forgiveness.

The last Jubilee Year was announced 15 years ago by Pope John Paul II.

In recognizing the importance of this announcement, let us focus on the beauty of God’s Forgiveness and Mercy as we come to the end of our Lenten Journey. 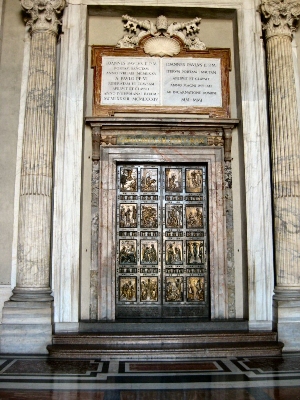